That was 11/16-11/20. But the list left out arson, robbery, burglary, assault, terroristic threats, and murder.

And when it succeeds, it becomes a Democrat Presidency. 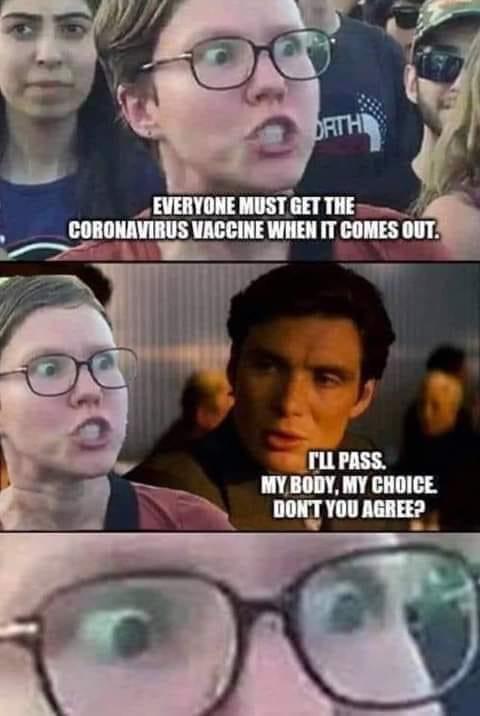 This is why perversion and modding of games doesn't go together. Or maybe why it does.

Vulpes Inculta said:
This is why perversion and modding of games doesn't go together. Or maybe why it does.

Funny side story about Fallout: New Vegas and mods.

To start with, what you're seeing in the pic there is one of the game's normal companions (Veronica) modded to hell and back. Appearance-wise, that body is actually a clothing mod. The face and hair are a different mod. The size is yet another. But that's not the funny story.

There's a separate mod called NosCo Companion (something-or-other) System (hereafter abbreviated NCCS) that lets modders create "aftermarket" companions. So I recruited one, tall big titty blonde broad named Samantha. She and the one pictured above accompanied me from a little town called Goodsprings all the way to another town called Primm. Here's where it gets weird. Apparently, NCCS companions aren't exactly... obedient. They're not fully autonomous, they're just not really very tightly scripted, so sometimes they just start doing their own thing.

So, somewhere in Primm, I lose "Samantha." Nowhere to be found. So I start searching the abandoned houses. Shouldn't be possible for a companion to travel between "cells" (individual maps within the game world; iow, she shouldn't be able to enter or leave a house except by following me.) Except she did. She was inside one of the abandoned houses and, weirder still, had apparently looted a dresser or a wardrobe or some shit and changed her outfit. On her own. Now, neither of those actions is something the game's normal companions ever does; probably something they're not even capable of doing.

And she's changed her status from following me to... not following me. Also not something a normal companion can do.

So I set her back to following me, change her outfit back, and leave the house. Is she following? Yes. Good. Off we go again, on to the next town. Five minutes later somebody starts shooting at us and only Veronica is shooting back with me. So (after the gunfight, of course) I look around and...

Sure enough, Samantha fucking bailed again somewhere along the way. *shrug* Fuck it. I proceed along the path toward the (New) Vegas Strip. About three hours and a bunch of side quests later, Veronica and I get to Freeside.

Lounging up against a school for Elvis impersonators. 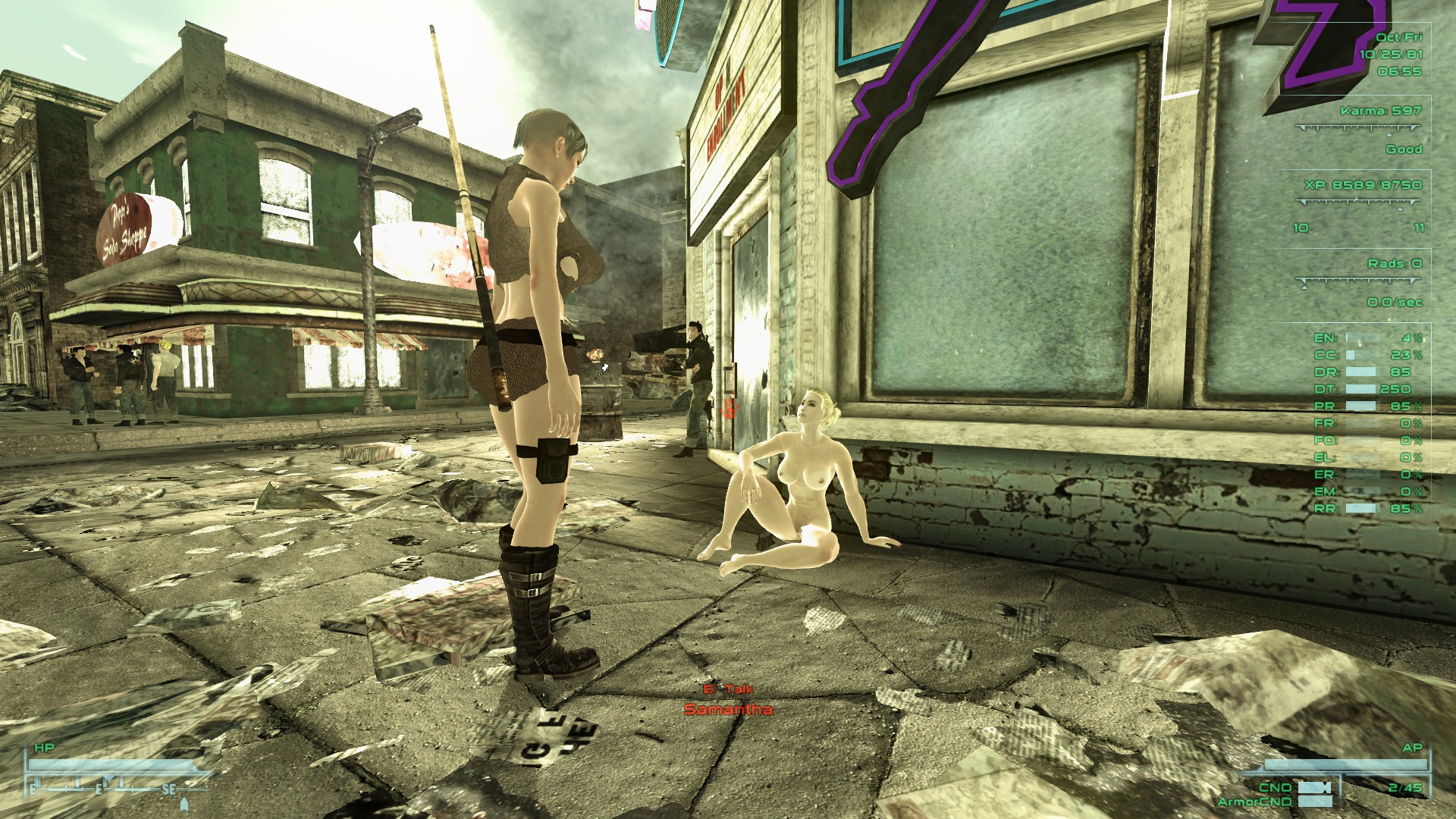 Edit to add: The mangy dame with the pool cue is another NPC. How/WHY they're staring each other down is a bafflement to me. Bethesda might have a habit of releasing games with more bugs than a goddamn root cellar, but damned if some of the bugs aren't interesting as hell.

Edit to the edit: If you look near the far left in the above image... yes, that's an NPC modeled on Johnny Bravo. Yes, that's on purpose. Whoever did the "Freeside Redone" mod actually added Johnny Bravo to the Elvis impersonator school area. Fitting enough, I guess. 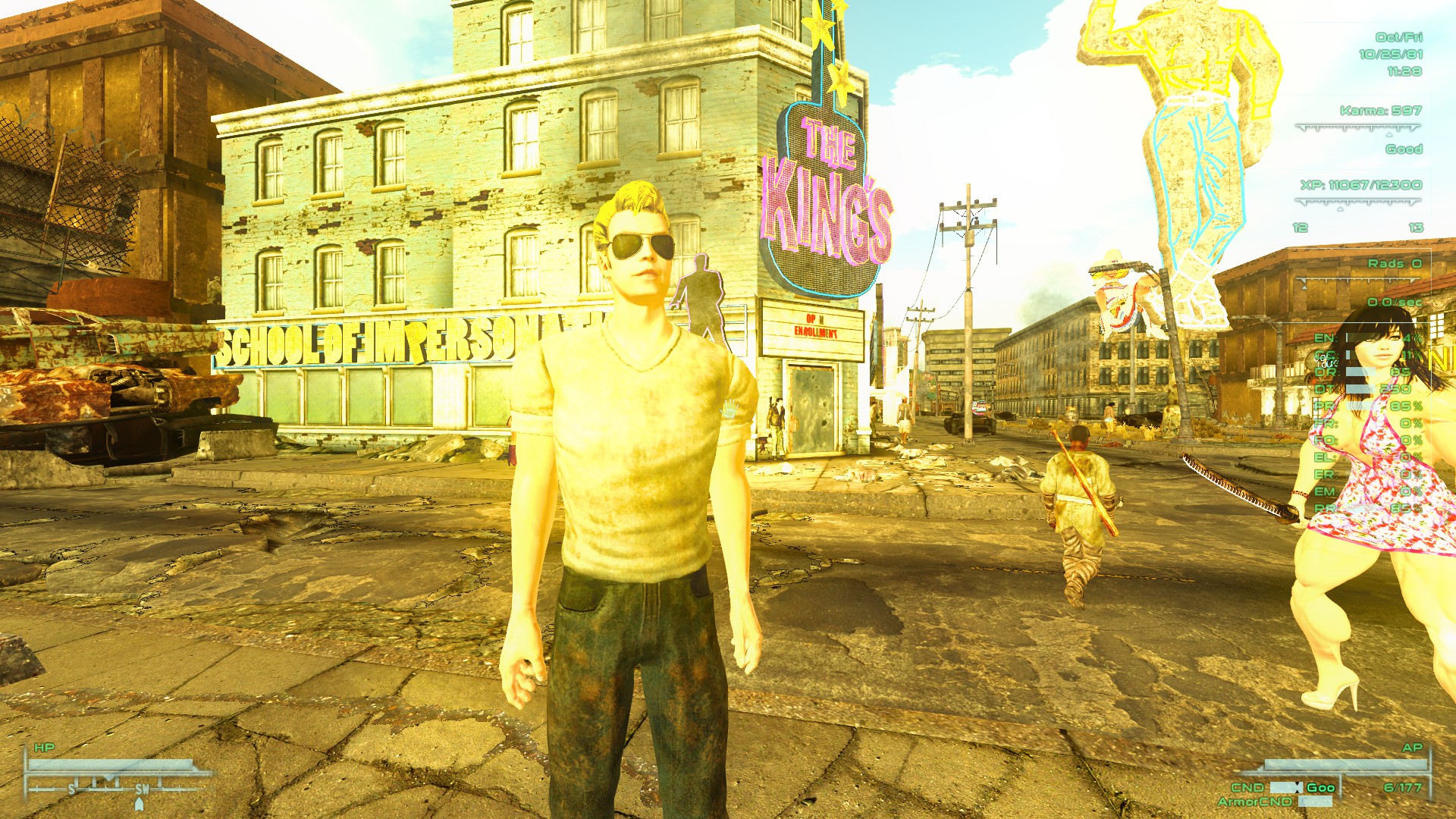 Pressuring people into taking drugs whether they want to or not... think the meme maker picked the wrong doctor. They wanted Mengele, not Crusher.