Nwora, Enoch lead No. 5 Louisville past Youngstown St. 78-55
Jordan Nwora scored 21 points and Steven Enoch added 17 points and a career-best 14 rebounds the Cardinals (2-0). With solid victories in its first two games, Louisville looks poised to not only stay in the top five but vault over Michigan State and Duke, both of whom lost on Tuesday,

Diakite has 19 points and 13 rebounds for No. 11 Virginia 65-34 victory over James Madison
Braxton Key finished with 14 points and 10 rebounds and, like Mamadi Diakite, spent most of the last 10 minutes watching. Jay Huff added 11 points and seven rebounds.

Mompremier's double-double leads No. 18 Miami women
Beatrice Mompremier, who averaged a double-double last season with 16.7 points and 12.2 rebounds per game, had 16 points and 11 rebounds. Kelsey Marshall had four rebounds and four assists to go with her 18 points. Endia Banks had 11 points and six assists and Mykea Gray scored 12 points as Miami won its 27th consecutive home opener.

Kentucky, Duke move up to top spots in AP poll
It marks the first time the Wildcats (2-0) have reached No. 1 since spending two weeks there early in the 2016-17 season. Duke climbed two spots to No. 2 after winning a top-4 matchup against Kansas at the Classic. The Spartans were No. 1 in the AP preseason poll for the first time in program history entering the Kentucky game but fell to third, followed by Louisville, which claimed the remaining first-place vote and Kansas.

Oregon stays atop AP poll, buoyed by win over national team
The Ducks remained a solid No. 1 in The Associated Press women's college basketball poll Monday, receiving 28 of 30 first-place votes from a national media panel. Oregon stunned the U.S. women's national team in an exhibition game on Saturday, handing the Americans only their second loss ever to a college program.

Women
Davis' 33 points, 10 boards lead Lady Vols past No. 15 Irish
Rennia Davis had a career-high 33 points and 10 rebounds to lead Tennessee past No. 15 Notre Dame 74-63 on Monday night. Tennessee hand Notre Dame its fourth home loss in the past 115 contests. UConn has the other three wins at Notre Dame--- Destinee Walker led Notre Dame (2-1) with 18 points. Sam Brunelle added 16 points.

No. 2 Duke rolls past Central Arkansas 105-54 for 3-0 start
Freshman Matthew Hurt scored a season-high 19 points. Fellow freshman Vernon Carey Jr. added season highs of 17 points and 10 rebounds for the Blue Devils, who played much of the night without starting point guard Tre Jones after he was shaken up during a first-half collision.

Women
Jones, Evans lead No. 9 Louisville past Central Michigan 76-63
Jazmine Jones scored 25 points and Dana Evans had 24, both career highs. The Chippewas held the rest of the Cardinals' shooters in check, they only shot 38.8% and committed 19 turnovers.

Georgia Tech appealing postseason ban, recruiting limits
The NCAA ruled in September that major recruiting violations were committed by one of head coach Josh Pastner's former assistants, Darryl LaBarrie, as well as an ex-friend, Ron Bell. Georgia Tech did not appeal the entire NCAA ruling, which included the forfeiture of all wins in which ineligible players were used, a fine of $5,000 plus 2% of the program's budget, and additional limits on recruiting.

Duke's Tre Jones thrives in win; flop rule starting to flop
As a freshman last season, Duke's Tre Jones established himself as one of the best defenders in the country, but he was still overshadowed on a nightly basis by Zion Williamson, RJ Barrett and Cam Reddish. Jones was regularly the fourth option on the offensive end and wasn't counted on to be a big-time scorer. Heading into this season, however, it was understood that would have to change; Jones needed to be more of a scorer. And without Williamson, Barrett and Reddish, Jones has thrived. He had 30 points, 15 assists and just four turnovers in the first two games of the season, against Kansas and Colorado State, but the best offensive game of his career came in Friday's 74-63 victory against Georgia State.

Jones finished with 31 points, four 3-pointers, six assists and four steals -- and Duke needed all of those points to hold off the Panthers for the first 25 or so minutes of the game. While it was considered the No. 2 incoming group in the country, Duke's freshman class is obviously not at the same level as last season's. Every newcomer on the team has gone through some struggles through the first four games, and it's going to be a work in progress to figure things out consistently on the offensive end, he will buy coach Mike Krzyzewski some time to mold the freshmen.

Early returns on the new flop rule aren't great
While the extended 3-point line received more attention heading into the season, it is the NCAA's attempt to rid the sport of flopping that has made more of an impact in the first two weeks. The NCAA is treating flops like delay-of-game violations: The first offense is a warning, and the second offense is a Class B technical foul.

Huff, Diakite lead No. 9 Virginia past Columbia 60-42
Jay Huff and Mamadi Diakite each scored 13 points. Clark added 10 points and five assists for the Cavaliers (3-0), who led 31-17 at halftime. Mike Smith scored 16 points to lead the Lions (1-3), whose point total was the highest Virginia has allowed this season.

Women
Louisville lands No. 8 prospect Hailey Van Lith
Van Lith, a 5-foot-7 guard who plays for Cashmere High School in Washington, ultimately chose the Cardinals over Baylor. UCLA and Oregon had also been schools she was considering. The Cardinals enter the early period of national signing week with the No. 14 class.

Now normally, this is where I'd post a pic of Mariner 10, but I think I'll shake things up a bit this time.

So instead, I'm gonna spam this son of a bitch with pics of Utsuho Reiuji - the girl from the video I posted in Blackfoot's "owned pawned trolled whatever" thread in SF. Don't worry, Mariner 10 will return. This is just to spice things up a bit. And why Utsuho? Well, aside from the previous vid.... I don't have a fucking clue. It's still more relevant to anything than what Blackfoot posts here. 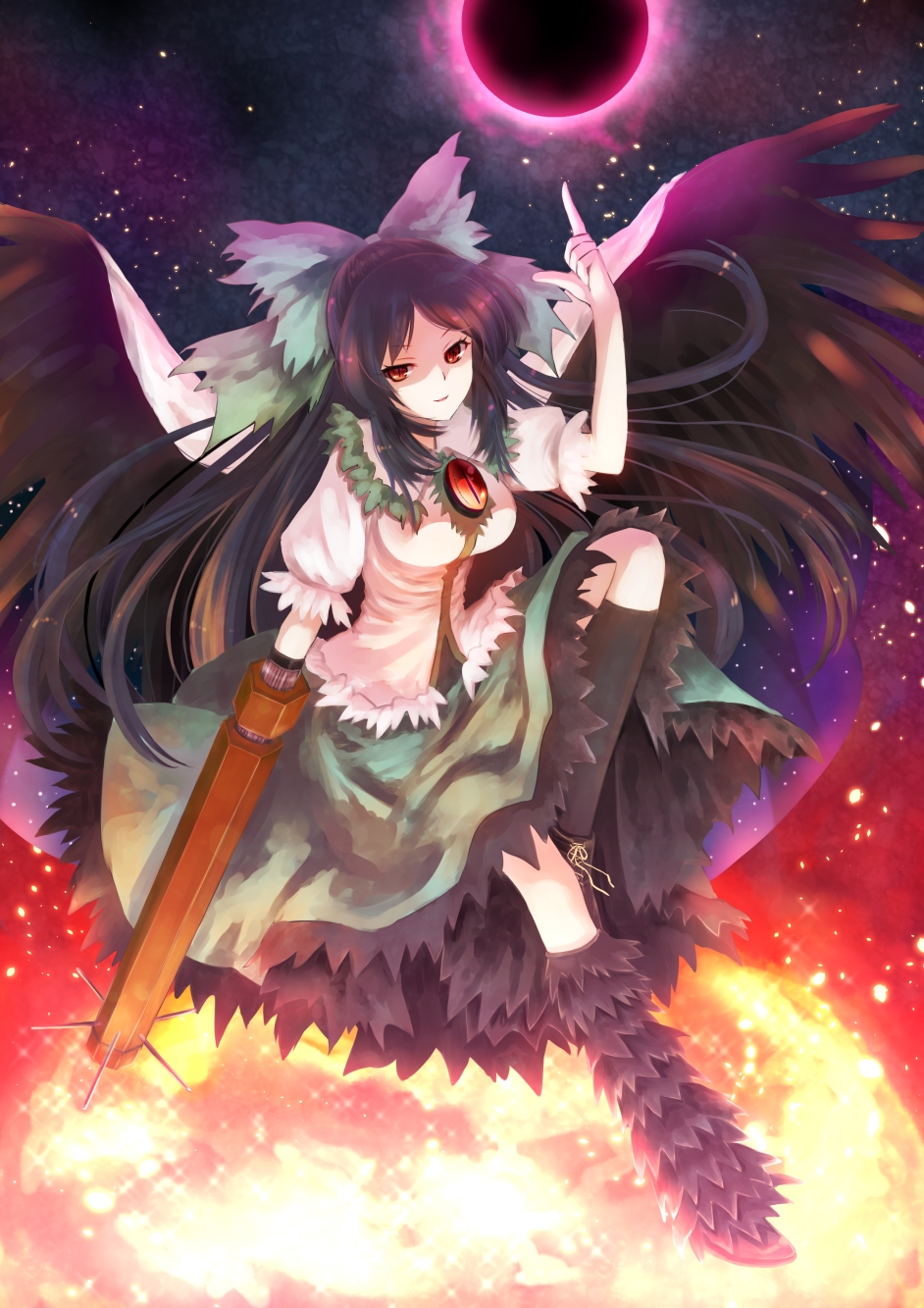 Top-25 basketball recruit Madeline Westbeld forging own path at Notre Dame
Westbeld, a 6-foot-3 forward at Fairmont in Kettering, is a five-star recruit and ranked the No. 23 prospect in the espnW HoopGurlz Top 100, she averaged 15.9 points and 10.4 rebounds as a junior last season. Madeline, now 17, committed to McGraw and Notre Dame on Oct. 17 after weighing the pros and cons of her other four finalists: Louisville, Ohio State, Tennessee and UCLA.

Jordan Nwora scores 17 points, No. 4 Louisville rolls
No. 4 Louisville cruised past North Carolina Central 87-58. Nwora needed only 21 minutes to do his damage. Steven Enoch made 7-of-9 shots to add 15 points. Dwayne Sutton scored 12 points on 5-of-6 shooting, and Darius Perry was perfect on four shots for 10 points and seven assists. Randy Miller Jr. led NCCU with 15 points.


Women
Woolfolk leads No. 12 Florida State women past Samford 88-59
Nausia Woolfolk hit four 3-pointers and scored 23 points and grabbed 12 rebounds. All five starters were in double figures for the Seminoles (4-0) with Kiah Gillespie scoring 15 points. The other three starters each had 10, including Nicki Ekhomu, who surpassed 1,000 career points. All nine Seminoles scored. Sarah Myers and Natalie Armstrong had 12 points apiece for the Bulldogs (1-4).


No. 17 Miami women pull away late from IUPUI 74-65
Endia Banks scored 23 points, Beatrice Mompremier had 20 points and 11 rebounds. Mykea Gray saved the Hurricanes (3-0), scoring all 16 of her points in the fourth quarter. Macee Williams led the Jaguars (2-1) with 17 points, Natalie Andersen had 15 and Holly Hoopingamer 14.