Get your booty to the polls

jack said:
Fixed that bullshit for you.
Click to expand...

First year mickey mouse trolling will not get you far with me.
"Down at the end of the hall is BALL STORAGE. For jocks, who like... BALLS. Like... Richie Marcus. D'ya hear me, Betsy? RICHIE... LIKES... BALLS."

jack said:
He's a fucking member here. In fact, he was a member here before you were. Too bad you aren't a member there. Suck it up buttercup. You don't get to call the shots, especially when you insist on breaking the rules.

Sorry, does that somehow, in your pointy, shiny little head, strike you as some kind of a rebuttal? Sorta like how a graft-prone, paedophilic, septuagenarian dementia sufferer seems to you to be "Presidential"?

Thing is, I've come to wonder why you wanted people to get their booty to the polls. You're clearly just fine with Dominion voting machines fabricating a Biden victory, no votes needed. What, you wanted it to have an air of legitimacy?

Only believe in polls when they suit you I see.

Looks like my sentiment for the thread was spot on. We got a new president. More people voted then ever.

And you got sour grapes

LOL @ Graham asking if Raffensperger could "toss some votes"

This is what Rudy said was going to the supreme court: “Pennsylvania and Michigan didn’t allow our poll watchers and/or vote observers to watch or observe.”

Here's a Republican poll watcher in Michigan. Looks close enough to me. You thugs aren't going anywhere with this bullshit, except to let foreign powers threaten our security while you cry like the sore losers you are. 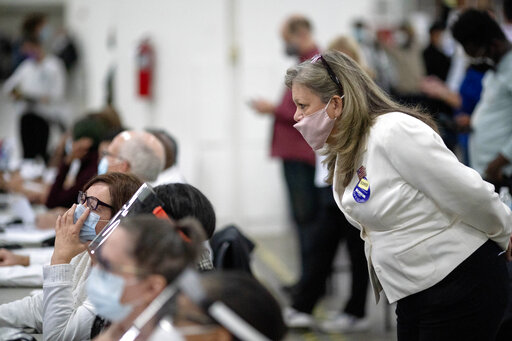 LOL here's what said supreme court said at the end of the day:

Guess that one didn't work out so well now, did it?

"There is a grim sense “that this is going to end quickly and badly,” one official said.

"In Wisconsin, all 72 counties completed canvasses of local election results, a spokesman for the state elections commission said Tuesday. Following the canvasses, Biden led Trump in Wisconsin by 20,608 votes, or about 0.6 percent, according to the Associated Press. Given that the margin separating the two candidates is less than 1 percent, Wisconsin law now allows for Trump to request a recount.

However, state law requires that the request be made no later than the end of Wednesday and that the Trump campaign must submit payment up front to cover the costs of the process if it wishes to proceed — which the state has pegged at $7.9 million for a statewide recount."

Oh Johnny, about Michigan and the illegal bullshit the Trump campaign is attempting? As usual your side forgets a rather important point:

"The president’s allies have said that if the board deadlocks, the legislature could choose to ignore Biden’s popular-vote win and seat Trump electors. But experts say such a move would be on shaky legal ground. And multiple election lawyers have said that scenario is unlikely for several reasons. Gov. Gretchen Whitmer, a Democrat, has the power to fire members of the canvassing board and appoint interim replacements without legislative approval. And Democrats are highly likely to file suit in the event the board deadlocks, because state law directs the board to follow the popular vote in its decision to certify. "

But it's fun watching the shoe polish run down the side of Rudy's face as he makes an even bigger ass of himself than previously thought possible.

My question to you is, in the face of no fraud, which has never even been mentioned in court would you go along with such an undemocratic attempt to undermine democracy?

That's what commies and fascists support. Guess that puts you squarely in that camp if you support ANY of this unfounded bullshit.

Here's another thing you're missing. All the fraud he's talking about (with no evidence at all) is in black cities. His racism (and yours by proxy) bleeds through everything.

Your side will NEVER get the black vote again.

I see you picked up a dingleberry. How quaint. Hope it doesn't bore through your asshole into your brain

I knew this would happen Trump thinks he's smart, but he ain't so fucking smart at all, just like his followers. I said this once before, I thought you were Libertarian? Guess that puts you in the same company as Rand Paul. Good stuff.