Week1: L
49ers beat Cowboys 17-9 in exhibition opener
Prescott completed all four of his pass attempts, caught one and lead Dallas to a field goal in a brief cameo

Week-2: W
Cowboys edge Rams 14-10 in preseason game in Hawaii
Prescott appears ready for the regular season, with or without Elliott. He completed all five of his pass attempts in his only series.

Week-4: L
Vinny Testaverde's son debuts, Bucs top Cowboys 17-15
Vincent could say he played in a preseason victory for the team that drafted his dad No.1 overall in 1987.

Week-1: W
Prescott lightens Elliott load as Cowboys top Giants 35-17
Dak Prescott still doesn't want to talk about contract. He was 25-32 for 405 yards and 4 touchdowns. Zeke had 13 carries for 53 yards and a touchdown.

Week-3: W
Dak Prescott, Cowboys get out of funn, ease past Dolphins 31-6
Prescott threw two touchdowns to Cooper before running for another score. Miami outgained Dallas in the first half (216-204).

Week-5: L
Aaron Rodgers, Packers at home of Cowboys again in 34-24 win
Rodgers looked quite comfortable at the home of Dallas. RB Aaron Jones had 4 TD's. The first three Green Bay wins over the Cowboys at their 10-year-old stadium were all dramatic. Jones had a career-high 182 scrimmage yards -- 107 rushing and 75 receiving.

Week-6: L
Sam Dornold throws 2 TD's in return, Jets edge Cowboys 24-22
Darnold gave the struggling Jets offense a huge boost in his return from mononucleosis for their first win. Darnold, finished 23 of 32 for 338 yards. Prescott was 28 of 40 for 277 yards. Elliott finished with 105 yards and a touchdown on 28 carries.

Week-7: W
Cowboys run over Eagles, take 1st in NFC East with 37-10 win
The Cowboys (4-3) are back in control of the NFC East after ending a three-game losing streak that clouded the high expectations for the defending division champions following a 3-0 start.

Week-9: W
Prescott throws for 3 TDs as Cowboys beat Giants again 37-18
Prescott shook off an interception on his first pass and threw for three touchdowns. Elliott ran for a season-high 139 yards. Brett Maher kicked three field goals..... Daniel Jones finished 26 of 41 for 210 yards, including a 65-yard play by Saquon Barkley, his longest reception.

Week-11: W
Cowboys get huge day from Prescott, beat Lions 35-27
Prescott threw for 444 yards and three touchdowns. The Cowboys (6-4) have won three of four games at least in part because Prescott has been tough to stop, with 10 TD passes and three interceptions during the successful stretch. Michael Gallup had nine catches for 148 yards, and Randall Cobb made four receptions for 115 yards to help the team compile 509 yards of offense.

Week-12: L
Pats hold Cowboys' No. 1 offense without TD in 13-9 win
Tom Brady threw a touchdown pass and the Patriots' defense held the Cowboys' top-ranked offense without a TD for the first time this season. Dallas (6-5) had a chance to take the lead late. But facing fourth-and-11 on its own 25 with 1:50 left, Dak Prescott's 20-yard completion to Amari Cooper was nullified after an official review.

The Official Home of The
DALLAS COWBOYS

Jason Witten: Jerry Jones comments on Cowboys 'completely fair'
The pointed comments made by owner and general manager Jerry Jones about the Dallas Cowboys coaching staff after Sunday's loss to the New England Patriots have not affected the players in the locker room.

Cowboys (6-5) at point in season where 'it makes you or breaks you'
Jones will have plenty of decisions to make whenever this season ends, starting with his coach, Jason Garrett. Jones sounded more frustrated after the New England loss about his coaching staff than at any point of the Garrett era.
Jones was asked if the Cowboys need to win their remaining games to make the playoffs. "I don't know," he said. "It has a lot to do with what Philadelphia does, of course."

Source: Cowboys told tripping penalties shouldn't have been called
Center Travis Frederick was flagged for tripping on third-and-1, negating an Ezekiel Elliott first down on a 3-yard catch as the Cowboys were driving for a potential go-ahead score late in the fourth quarter. On third-and-11, Dak Prescott's pass to Randall Cobb was incomplete, and his fourth-down pass to Amari Cooper that went for 20 yards was correctly overturned by replay, effectively ending the team's chances to win.

Week 13 NFL Power Rankings: 1-32 poll, plus what each team is thankful for
Each team (yes, even the Bengals) has something to be thankful for this season. From superstar players to hotshot rookies to schedules that are about to get a lot more friendly.

Jerry Jones was critical of Jason Garrett and the staff after Sunday's loss to New England. What was Garrett's reaction to Jones? “We've just got to focus on coaching as well as we can and playing as well as we can,” Garrett said. “There certainly were some things in the game that we have to get better at, and we're going to work on that as a staff and as a football team. But again, our eyes are forward on Buffalo.” With a short week, there was not the normal post-game meeting with Jones.

The league office informed the Cowboys that the tripping penalties on left tackle Tyron Smith and center Travis Frederick should not have been called in Sunday's loss to New England, according to a source. The Frederick penalty negated a first down catch by Ezekiel Elliott as the Cowboys were driving for a potential go-ahead score late in the fourth quarter.

The Cowboys will be without nose tackle Antwaun Woods Thursday against Buffalo because of a sprained knee, which will move Christian Covington into the starting lineup. It will also providerookie Trysten Hill another opportunity to show the coaches he is ready to play. The second-round pick has been inactive for seven of 11 games.

Much was made about Jason Garrett's decision to kick a field goal with 6:08 to play facing fourth and 7 against New England. Did Garrett communicate to coordinator Kellen Moore that the Cowboys could be in a four-down territory? “I don't think it's a good idea to constantly interject on a guy calling a play,” Garrett said. “You want pick your spots in those situations.”

In addition to the $100,00 he pledged when he signed his contract in September, the Cowboys and Ezekiel Elliott raised another $150,000 in ‘Zeke who?' t-shirt sales that was donated to the Salvation Army as the Red Kettle campaign kicks off. "Just being around a little bit and seeing the work they do, I really like the cause and I really like what they do for this community," Elliott said. "I wanted to be a part of it."

The Cowboys' practice report remains unchanged for the second straight day. La'el Collins (knee), Jeff Heath (shoulders), Zack Martin (elbow, back, ankle) and Connor Williams (knee) were limited. Leighton Vander Esch will miss his second straight game with a neck injury and Antwaun Woods is out with a sprained knee. 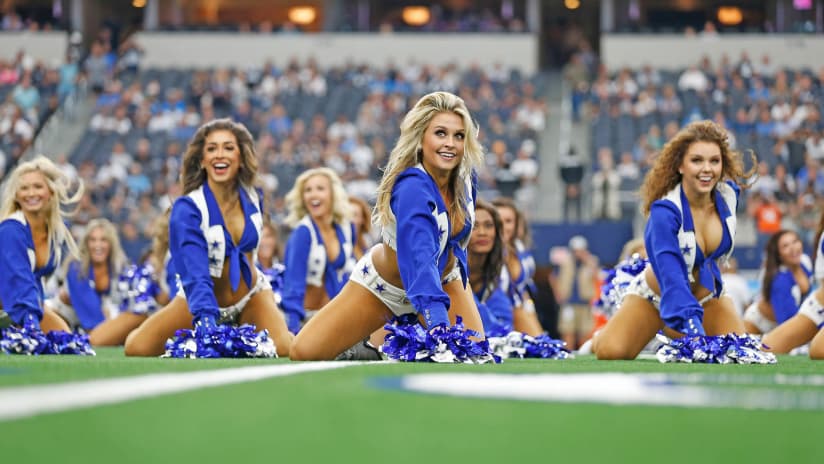 NFL execs predict Dak's (and Dallas') future: He bet on himself ... and will win
Here's where the intrigue deepens: The gap between the money Prescott's leverage commands vs. what executives see as his real worth is fairly wide. Dak Prescott is changing the way we look at bet-on-yourself quarterback money. Not only did he pass on the Dallas Cowboys contract overtures this summer but he took ownership of a run-heavy offense on the way to a potential 5,000-yard passing season.

Why do the Cowboys always play on Thanksgiving? Explaining Dallas' holiday tradition
The Cowboys' tradition of playing on Thanksgiving started when then-general manager Tex Schramm signed up for the holiday game in 1966.