you must think people actually care about this shit?

It's official. MMA legend Chuck Liddell and Tito Ortiz will rekindle their infamous rivalry in a trilogy bout later this year, under the banner of Oscar De La Hoya's Golden Boy Promotions.

The pay-per-view event will take place nearly 12 years after Liddell knocked out Ortiz in the third round of their second meeting, at UFC 66 in December 2006.

Scotland's Joanne Calderwood has been booked against Brazilian Kalindra Faria for UFC Fight Night in Lincoln, Nebraska, on Aug. 25.

She lost two straight after winning 11 of her first 12 professional fights.

Ronda Rousey was inducted into the UFC Hall of Fame, becoming the first female inducted in the company's history.

Rousey was the UFC's first women's champion, holding the bantamweight belt from 2012 to 2015 and defending it six times.

Rousey was the first American woman to win an Olympic medal in judo when she claimed bronze at the 2008 Summer Olympics in Beijing.

Light heavyweight champion Daniel Cormier (21-1) added UFC's heavyweight title Saturday at UFC 226, as he knocked out Stipe Miocic with a shot right hand in the opening round.

Conner McGregor, who accomplish in late 2016.

The earliest Brock Lesnar would even be eligible to return to the Octagon is in six months, do to an ongoing drug suspension.

The UFC is hoping to book the women's featherweight title fight for UFC 232 on December. 29 in Las Vegas.

Nunes is the UFC women's bantamweight champion. She owns victories over Rhondo Rousey, Miesha Tate, Valentina Shevchenko, among others.

Justino is considered the best female fighter in the world. Her lone lost came in her professional debut in 2005.

Nick Newell came up short in his bid for a UFC contract.​
Newell (14-2), a congenital amputee with a left arm that extends just past his elbow, suffered a unanimous decision defeat to Alex Munoz (5-0) at Dana White's "Tuesday Night Contender Series"

All three judges scored it a clean 30-27 sweep for Munoz, a 28-year-old prospect out of Team Alpha Male in Sacramento, California.

Ex-NFL player Greg Hardy (2-0) earned his second MMA professional win in stunning fashion, as he knocked out Tebaris Gordon (3-1) in just 17 seconds. Hardy knocked out Austen Lane in 57 seconds in his first fight.

Alex Oliveira (20-4-1) defeated Carlo Pedersoli by first-round TKO in just 39 seconds, is victorious in four of his last five fights.

In three days, Chuck Liddell and Tito Ortiz will square off for the third time at The Forum in Los Angeles. Their unexpected trilogy has drawn a mixed reaction from the MMA community. Golden Boy Promotions' Oscar De La Hoya would have you believe fans have waited years for this, which is simply not true. Liddell is 48, and hasn't fought since 2010. Ortiz is 43, and lost the first two meetings convincingly.

Liddell wants to prove he's still got it and, frankly, never lost it. It's no secret his decision to retire in 2011 was heavily influenced by Dana White, his friend and the president of the UFC.

And for Ortiz, this is a chance to rectify what he's always seen as one of the greatest wrongs of his career. The way Ortiz sees it, the UFC favored Liddell during their rivalry and stacked the deck against him whenever it could. 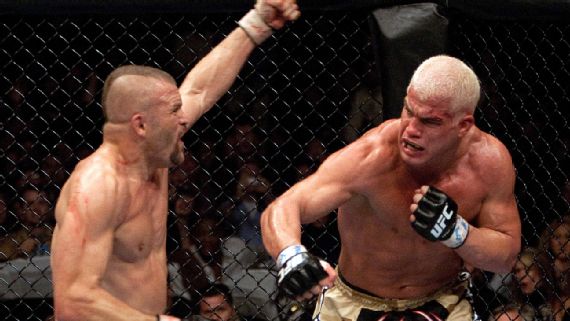 Arnold Berdon, the husband of UFC flyweight Rachael Ostovich, was arrested on suspicion of second-degree attempted murder. Berdon, who turned himself into Honolulu police late Tuesday, has not been formally charged with a crime but remained in police custody as of Wednesday evening.

Berdon is also a professional MMA fighter, with a 7-2 overall record. He has fought on various regional shows, including Titan FC and Victory FC. Ostovich was scheduled to face Paige VanZant at UFC Fight Night on Jan. 19 in Brooklyn, but was forced to withdraw due to the injuries suffered last weekend.