Dallas Cowboys RB Ezekiel Elliott hopes to rebound with focus on nutrition, quickness
Elliott signed a six-year, $90 million extension in 2019 that guaranteed him $50 million. He is set to make $9.6 million this year and his $12.4 million base salary in 2022 is already fully guaranteed.

The Cowboys want to use Micah Parsons' versatility but Mike McCarthy felt they overdid it with the rookie Thursday. "His volume yesterday was off the charts as far as how much he did out there on the practice field. I think that speaks to him and his ability and his talent," he said. "… We have great challenges in front of us as far as trying to play all those guys but you don't want to spread him too thin because he is unique."

Considering where he was last October after suffering a gruesome ankle injury, Dak Prescott took a moment to reflect before his first practice. "That's something I did well before the injury, so now, it's been a long time since I've been out there," he said. "It's been awhile since we've been in Oxnard. That was a special moment just to think about where I was, think about all the hard work and support and everything that went into me being back out there and being able to do what I love again.

Ezekiel Elliott said he grew up in a household that did not believe in vaccines, but he got the COVID-19 vaccine regardless. "Just because I wanted to put myself in the best situation to be out there for my team week in and week out," he said. "But I mean not everyone feels that strongly or maybe other people still have their view of vaccines. You can't force someone to do something that they don't to do to their body."

With Dak Prescott out, Dallas Cowboys turn to Garrett Gilbert at No. 2
Gilbert, 30, has played in as many NFL games (seven) as he has professional teams. The Cowboys, Browns, Panthers, Raiders, Patriots, Rams and the Orlando Apollos of the defunct Alliance of American Football. Prescott's shoulder strain has not altered their plan at the moment,

Week-3: L
Wilson throws 5 more TDs, Seahawks topple Cowboys 38-31
Russell Wilson was 27 of 40 for 315 yards and five touchdown passes, setting a record for most scoring passes in the first three games of a season with 14. Lockett set a career high with three TD receptions and finished with nine catches for 100 yards. Prescott finished 37 of 57 for 472 yards, with three touchdowns and two interceptions. He set career highs for yards and attempts.

Week-4: L
Mayfield, Garrett right at home as Browns beat Cowboys 49-38
Mayfield threw for two touchdowns and Beckham scored three time. The Browns ran for 307 yards and three touchdowns despite losing lead back Nick Chubb. Dak Prescott had his first 500-yard game, throwing for 502 yards and four touchdowns while becoming the first NFL quarterback with at least 450 yards passing in three straight games. Amari Cooper had 12 catches for 134 yards and a TD.

Week-5: W
Cowboys turn tables on Giants with fumble return, trick play for TDs
QB Dak Prescott caught a TD pass on a throw from Cedrick Wilson and Anthony Brown returned a fumble for a score as Dallas rallied from a 17-3 deficit. QB Daniel Jones was 20-33 for 222 yards for the Giants.

Week-6: L
Without Dak Prescott, all was lost for Cowboys in MNF loss to Cardinals 38-10
Dallas Quarterback Andy Dalton completed 34 of 54 passes for 266 yards and was intercepted twice. Elliott fumbled on consecutive drives that the Cardinals turned into touchdowns. The Cowboys (2-4) are off to their worst start since 2015, when they had to start four different quarterbacks because of a twice-broken right collarbone suffered by Tony Romo.

Week-7: L
Dallas Cowboys QB Andy Dalton suffers concussion in loss to Washington 25-3
Before the injury, Dalton completed 9 of 19 passes for 75 yards. He was sacked three times and fumbled on the Cowboys' first possession, leading to a safety. The last time the Cowboys had to use three quarterbacks in a season because of injury came in 2015. Tony Romo, Brandon Weeden, Matt Cassel and Kellen Moore.

Week-8: L
Cowboys' ineptitude continues in loss to Eagles 23-9
For just the fourth time in franchise history, the Cowboys have failed to score a touchdown in back-to-back games. Their lone touchdown in the past three games was a garbage-time score against the Arizona Cardinals. DiNucci completed 21 of 40 passes for 180 yards and was sacked four times. He also lost two fumbles. Diggs became the first Cowboys rookie to intercept two passes in a game since Sean Lee in 2010.

Week-9: L
The Steelers survived and moved to 8-0 for first time in franchise over the Cowboys 24-19
Gilbert completed 21 of 31 passes for 243 yards with one touchdown and one interception. The Cowboys stayed ahead of the Steelers with four field goals by Greg Zuerlein. It wasn't pretty, but the Steelers rallied from a 13-point deficit against the Cowboys.

Week-12: L
Smith, Washington in 1st after Thanksgiving win over Cowboys 41-16
Smith, who was a modest 19 of 26 for 149 yards and got bailed out on his only interception when receiver Terry McLaurin ran down Dallas linebacker Jaylon Smith to prevent a tying touchdown before the Cowboys had to settle for a field goal. Dallas (3-8) couldn't build on a big win at Minnesota, losing for the fifth time in six games since star quarterback Dak Prescott's season-ending ankle injury.

Week-14: W
Dalton returns to Cincy, leads Cowboys over Bengals 30-7
Andy Dalton was good enough in his return to Cincinnati, tossing two touchdown passes, going 16 for 23 for 185 yards as the Cowboys (4-9) stayed in contention in the weak NFC East. The Bengals (2-10-1), whose offense has struggled mightily since quarterback Joe Burrow was lost to a knee injury on Nov. 22, got in a hole early and couldn't dig themselves out.

Week-15: W
Pollard scores 2 with Elliott out, Cowboys beat 49ers 41-33
The Cowboys (5-9) are a game back in the NFC East with two games remaining but have to win both against Philadelphia and the New York Giants while Washington loses twice. The 49ers (5-9) became the second Super Bowl runner-up in the past 13 seasons to finish with a losing record the next year. San Francisco was eliminated from playoff contention.

Week-16: W
Cowboys beat Eagles 37-17, stay alive with Washington loss
Andy Dalton threw for 377 yards and three touchdowns, two to Michael Gallup and the Cowboys (6-9) won their third consecutive game to stay alive in the playoff race. The Eagles (4-10-1) led 14-3 in the first quarter after DeSean Jackson's 81-yard touchdown catch in his first game in two months coming off an ankle injury, and they would have controlled their playoff fate against Washington with a win.

Week-17: L
Giants outlast Cowboys 23-19, lose division hours later to WSH
Jones was 17-of-25 passing for 229 yards and two touchdowns, ending Dallas' seven-game winning streak in the rivalry. Williams had seven tackles, three sacks and hit the quarterback five times. Dalton was 29 of 47 for 243 yards and was sacked six times. Elliott gained 42 yards on 14 carriers and finished the season with 979 yards, short of 1,000 for the second time in his five NFL seasons.

2014: Greg Hardy hadn’t even played a down for the Cowboys yet in 2014 when he was arrested for domestic violence after strangling and threatening to kill a former girlfriend. Still, after his time with the Carolina Panthers ended, the Cowboys chose to sign Hardy — a move that was met with much criticism. Hardy played one season with the Cowboys, missing the first four games of the season due to a suspension for that domestic violence issue.

Forbes: Average value of NFL franchises up 14% despite revenue drop, topped by Dallas Cowboys
For the 15th straight year, the Dallas Cowboys are valued as the most expensive franchise, reaching $6.5 billion, an $800 million increase over their value in 2020.

Thu, Aug 5 (HOF): vs Pittsburgh
Steelers use strong 2nd half to beat Cowboys 16-3

Dallas Cowboys owner and general manager Jerry Jones did not say when it would happen, but he made an announcement Thursday night that many hoped would come sooner rather than later: Jimmy Johnson will be inducted into the team's Ring of Honor. Johnson will be inducted into the Pro Football Hall of Fame this weekend, and Jones has said in the past that he did not want to take away from that moment when discussing when or if Johnson would be put into the Cowboys' Ring of Honor. After a 1-15 record in 1989, his first year after taking over for Tom Landry, Johnson led the Cowboys back to prominence, with wins in Super Bowls XXVII and XXVIII. He and Jones had a falling out after the second championship, but Johnson is given a large amount of credit for the Cowboys' win in Super Bowl XXX under coach Barry Switzer, a victory that made Dallas the first franchise to win three Super Bowls in four years. In five seasons with the Cowboys, Johnson had a 44-36 record and went 7-1 in the postseason. 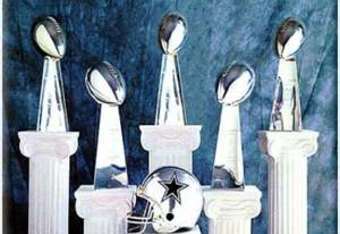